The son of a rocker and a Kiwi supermodel has signed with the Queenstown Stampede ice hockey team for the 2019 season. 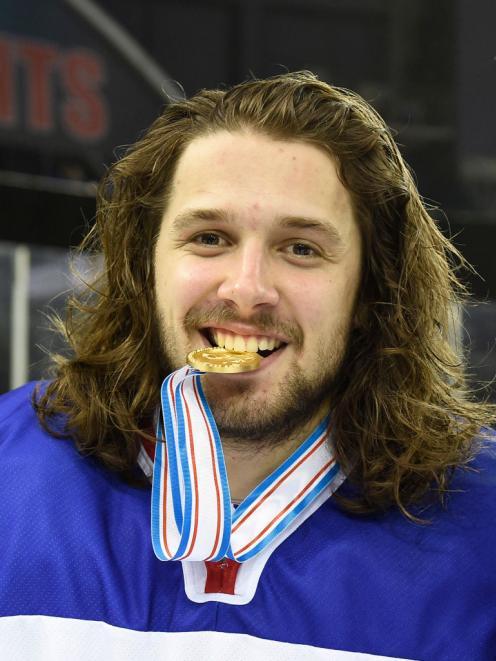 Great Britain’s Liam Stewart with his gold medal after their win in the Ice Hockey Division 1B World Championship event in Northern Ireland in 2017. Photo: Getty Images

Liam Stewart (24), Rod Stewart’s second child to his second wife, former model Rachel Hunter, is expected to arrive in the resort within the next fortnight.

British-born Stewart, a forward, holds a New Zealand passport, through his mother, and will use it to play as a “local” in the New Zealand Ice Hockey League.

“I actually don’t really know how we did it.

“Mike’s been working on it for a while.

“We talked to him [Stewart] about the opportunity to come back to New Zealand and play and I guess it just fitted in with his personal preferences, so he’s just going to come to Queenstown and see how he goes.”

Stewart spent four years with Washington’s Spokane Chiefs in the Western Hockey League, and a season with the Quad City Mallards and Alaska Aces.

On his move to Britain, he played a season for Coventry Blaze and most recently Surrey’s Guildford Flames in the Elite Ice Hockey League.

He also took to the ice for Great Britain at the world championships (division 1B) in 2017, scoring twice to help the country win gold.

Last year, he was to have played for the Sheffield Steelers but sustained a concussion in mid-January. His symptoms returned mid-year, halting the deal.

Frear said many players at that level “tend to get knocked around a bit”.

“As far as we understand he’s healthy and he’s coming at us ready to play.

“To have someone who’s played for Great Britain, that’s like three to four divisions above what our Ice Blacks play at.”

Frear said more announcements about season imports were expected within the next week before the first game against Dunedin Thunder, in Queenstown on May 31.

Frear said Stewart would attend a Stampede quiz night fundraiser at SkyCity Casino on May 17 and take part in a fan night on May 18 at the Queenstown Ice Arena.

Season off to a flyer